How to protect your garden from frost

We are knee deep in snow at the moment, so for some of you this blog post might be a little too late. Sorry!

We are knee deep in snow at the moment, so for some of you this blog post might be a little too late. Sorry! At least it will help you be a little more prepared for next winter. Anyway, most gardeners already know the importance of protecting their vulnerable plants against frost and we don't want to spell out the blooming obvious. However, frost can catch out even the most experienced gardeners, with the worst being those cold snaps that can occur in spring, which will harm new shoots and flower buds. The appropriate protection needs to be in place before any frosts start, so at Lazy Susan we've pulled together a little guide that will help to improve your plant’s chances of making it through the Winter. 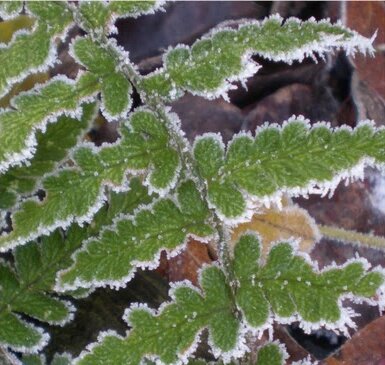 Frost will occur when temperatures fall below 0°C and in the UK frost can form on your vegetable garden plants in the spring, autumn and winter months, causing some serious damage I might add. Radishes, lettuce, tomatoes, peppers and sweetcorn are highly susceptible to frost for example. Keep on top of weather forecasts for frost so you can prevent your vegetables from being destroyed. Be aware that frost can occur in your garden even if temperatures are predicted to be around 5°C – 10°C mark, especially if your garden is in a low area where colder air can accumulate during the night, then the temperature will drop much lower than predicted by the weather forecaster.

Firstly, think about the parts of your garden where frost always tends to hang around that little bit longer. For example, a sloping garden is more susceptible to cold air getting trapped by a fence or hedge at the bottom (as cold air is heavier than warm air) and by simply creating a narrow exit for the air to escape will usually solve the problem. Likewise, improving the airflow around a sheltered walled garden allows the frost to thaw gently as in many cases plant loss is caused not by the frost itself but the rapid thawing that follows. You can remedy this by providing some shade from the early morning sunshine rising in the East.

One thing I will say is that whichever method of frost protection ‘cover’ you choose none will guarantee you from loss in a harsh UK winter. I’m afraid it is a case of doing as much as you can and a little bit of finger crossing. The best types of basic natural ground cover in Lazy Susan’s opinion are as follows:

If you want to get a little more sophisticated, then you can look at using a horticultural fleece or polythene sheets. Horticultural fleece is one of the most versatile methods of frost protection and is ideal for allowing light, air and water through, but still maintaining a more even temperature than say polythene or glass. The fleece will protect tender plants and foliage from frost and snow by freezing before it can penetrate the plants below. I generally comes in two thicknesses and depending on quality, the thicker fleece should last longer but care must be taken with all fleece as it can tear. Thinner fleece can be doubled over to increase its effectiveness against frost and snow.

Polythene sheets on the other hand are a pretty effective way of keeping a light night frost off tender plants and to protect early sowings. However, unlike the horticultural fleece, polythene will not allow air or water through and will restrict light. The build up of daytime heat will also cause condensation to form and the temperature to fluctuate, so in Lazy Susan’s opinion should only really be used for night cover. That said a combination of polythene over fleece at night gives you far greater frost protection for your early flowering plants. You then just remove the polythene during the day leaving just the fleece to protect against cold winter winds.

The Cold Frame is a highly effective form of frost protection and they will protect your crops and extend the growing season. They are also great for acclimatising plants to lower temperatures (toughening them up if you like) prior to planting out in the garden. If you are making your own cold frame, use polythene sheets instead of glass for a more child/pet safe solution, but glass will always give you better growing results. If you are buying a cold frame made from a material such as aluminium and twin wall polycarbonate sheets, then always make sure it is secured to the ground as in strong winds they are like kites. Always remember to open the lid to ventilate the cold frame on warm days when condensation starts to form.

There are many types of cloches, such as tent, barn, tunnel and bell etc, but they all basically perform the same function of protecting seeds and plants from frost, heavy rain and animals. They are ideal for warming and keeping the soil dry prior to seed sowing during the growing period and the main benefit of using cloches over cold frames and other types of protection is that they are very light and portable. However, in our experience, there are a few drawbacks to using cloches. Firstly, they do tend to be quite expensive in comparison to other methods and they provide very limited protection from frost. You can line cloches with another material like horticultural fleece for greater protection during periods of hard frost.