Not one but two April Garden Benches from Lazy Susan have been featured in the latest series of ITV’s Love Your Garden with Alan Titchmarsh.

Not one but two April Garden Benches in Slate Grey from Lazy Susan have been featured in the new series of ITV Love Your Garden with Alan Titchmarsh.

Our furniture took centre stage in the first episode of the current season, and we were delighted to be given the opportunity to provide some new outdoor seating for the garden of a truly deserving homeowner.

Now on season 11, the show has a new revamped 1-hour format, with the episode featuring our April Garden Benches first airing on Tuesday 5th October 2021.

If you missed it, the episode is available to watch on the ITV Hub now! 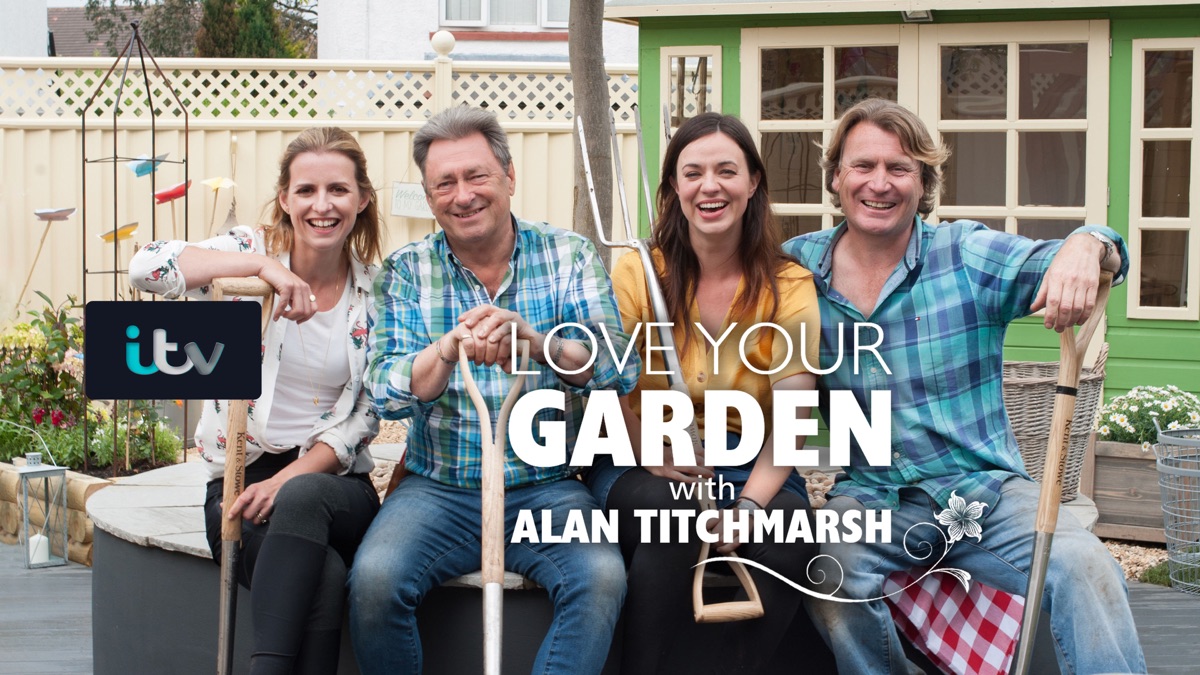 Giving a little back to those that help others

Whilst the format of the show has been expanded, the MO of the Love Your Garden team remains the same; to transform tired looking plots into breathtaking gardens for those that deserve a little help. 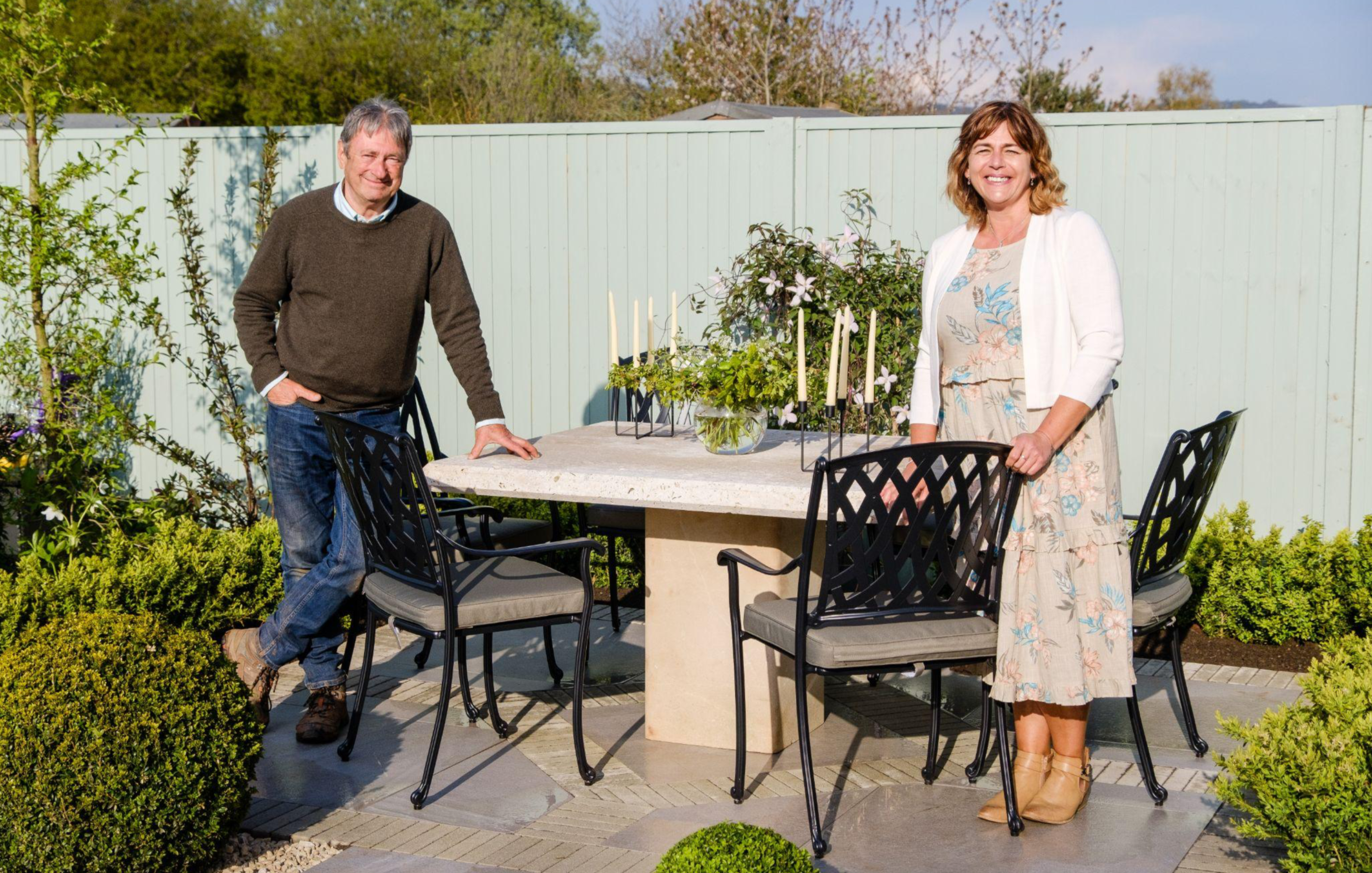 In this episode, the homeowner in question was Mel, from Taunton in Somerset (pictured above with Alan in her beautiful new garden).

Mel is a Dementia Ward manager who works at a Royal British Legion care home. She’s also a full-time mum and carer for her 90-year-old Dad.

Her colleagues at the care home nominated Mel for a garden makeover as they felt it would be just the tonic for somebody who gives so much. Mel’s current plot was lacking colour and the layout was all a little bit, in Alan’s words, “higgledy-piggledy”.

The care home looks after ex-servicemen and women suffering from dementia, and Mel makes a big difference to the lives of the residents, so it was nice for Lazy Susan to get involved and play a small part in doing something special for her.

And while Alan and the team of Frances Tophill and David Domoney set to work on Mel’s garden, Katie Rushworth was also tasked with giving the garden at the care home a bit of green-fingered TLC too.

A Touch of Stately in Somerset

For Mel’s garden, Alan wanted his design to take inspiration from British stately homes, and the Bowood House estate in Wiltshire in particular.

Featuring a stunning garden designed by Lancelot "Capability" Brown, it has all the trademark symmetry, tree-lined walkways, neat hedgerows, water features, follies, grottoes and sweeping lawns you would expect.

Alan set out to show us how you can take inspiration from the grand gardens of the nation's stately homes to create a beautiful design that is just as at home in a traditional domestic garden.

He created a beautiful design that took inspiration from Bowood and included terraces and walkway of topiary that lead the eye to the end of the garden and borrowed from the stunning views of the countryside beyond.

Capability Brown was known for his gardens giving the impression that they went on forever, and Alan wanted to try and incorporate those techniques into his design.

There was space for a formal dining area and laid back sofa set, while the end of the garden featured a natural country-style ‘hedge’ to blur the lines between the garden and beyond, along with that all-important water feature.

Our April Garden Benches were to be featured adjacent to the natural hedge and Alan’s plan was to wrap them with plants and flowers to give Mel a secluded spot to sit back and relax.

As you can see from the photos we’ve included, and if you watch the show, the finished garden was simply breathtaking.

Alan and the team did a fantastic job, and really captured the spirit of the gardens at Bowood.

They created a garden that gave Mel the perfect space to take in nature and the stunning vistas beyond.

The finished garden blended perfectly with the surrounding countryside, while a beautiful porcelain pathway drew the eye down to the water feature and beyond.

David’s concrete plinth for the sundial was another real triumph in our book, and it just shows what you can do with a little creativity! 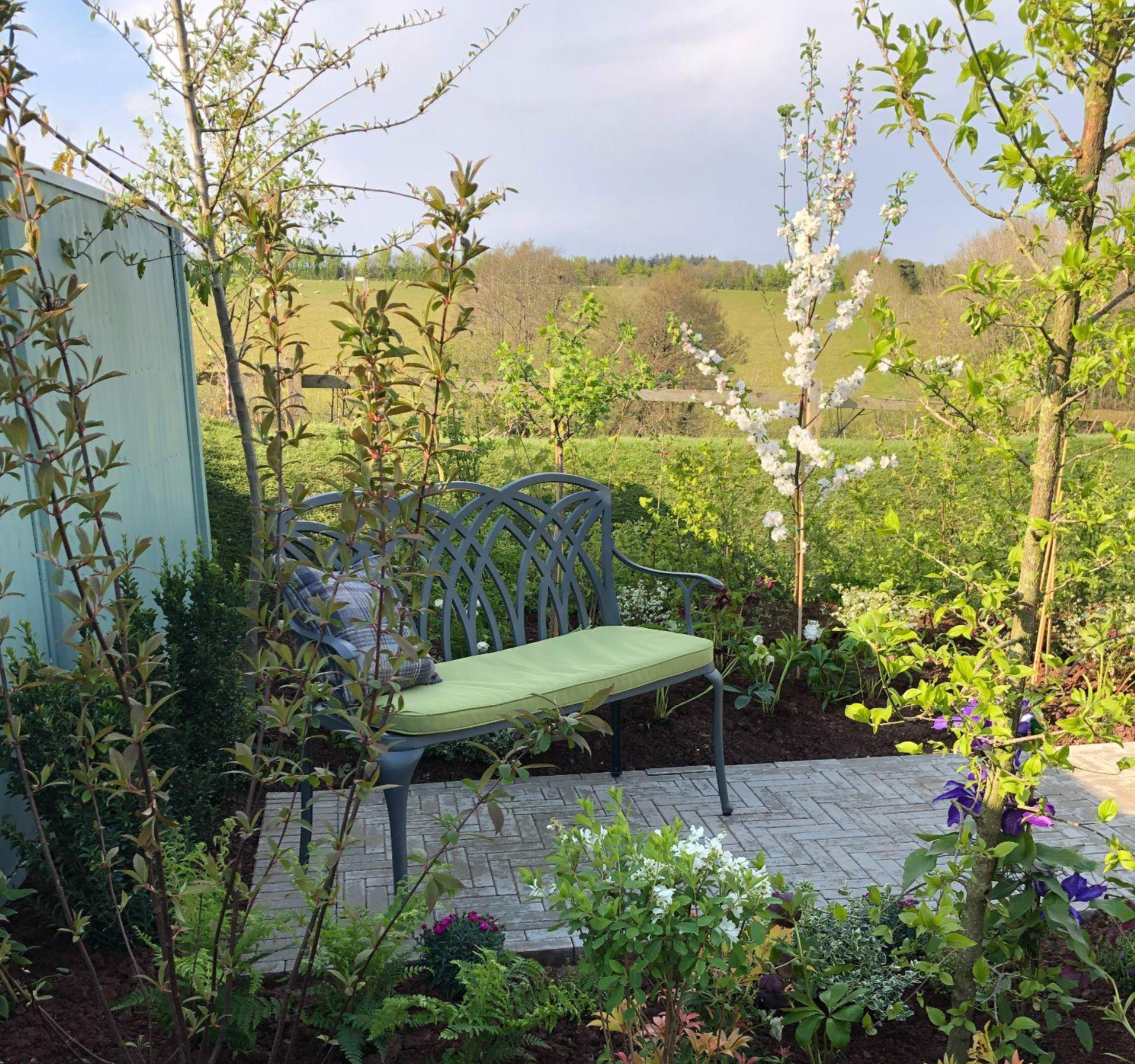 Our April April Garden Benches were placed in two ‘nooks’ at the foot of the garden (one is pictured above).

Surrounded by fabulous fruit trees and colourful planting it gives them a wonderful air of peace and tranquillity.

The Lazy Susan team were delighted to hear Alan single out our garden benches as “one of the few creature comforts” in the finished design scheme.

At the unveiling, the homeowner was left speechless, moved to tears, and with her family echoing our thoughts that this lady truly deserved such a beautiful outdoor space.

Our Benches gave Mel and her Dad a great place to sit and enjoy the view, take in the rest of the garden, and it was lovely to see her sat relaxing with a G&T in the end segment on what she called ‘her’ seat.

The big advantage of our garden furniture over many other materials is that it’s constructed from cast aluminium so it can be left outside all year round.

The protected painted finish will prevent it from pitting with very little upkeep, and whilst the metal is sturdy, it is not so heavy that it can’t be picked up and moved if need be. 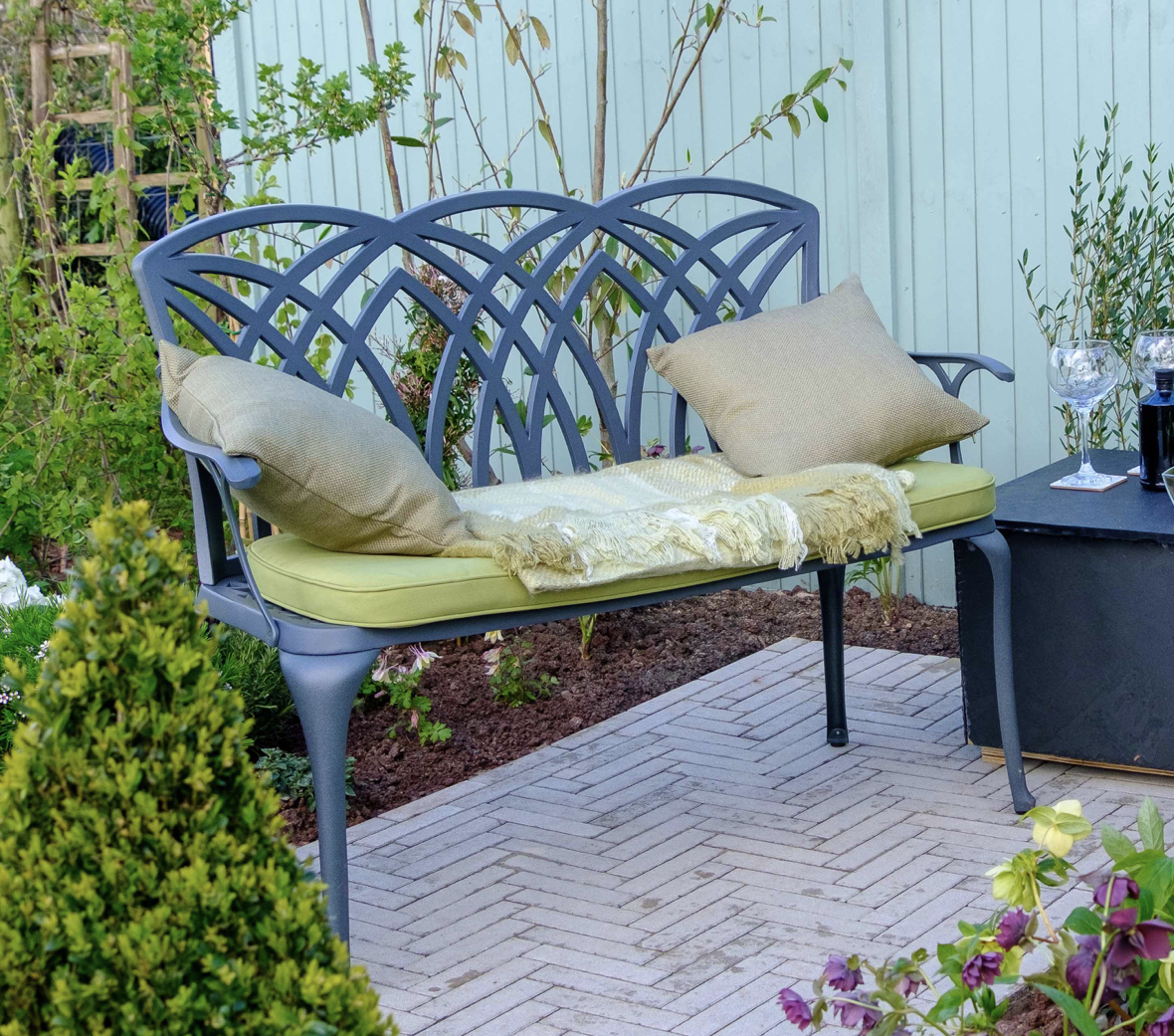 Alan and the team upped the comfort for Mel by pairing our Bench with our coordinating Apple Green April Bench Cushion (shown above), which, if purchased together, you can currently save 20% off RRP!

The timeless elegant design of our furniture means it won’t go out of style, and it was the perfect addition to the classic lines of Alan’s stately home inspired garden revamp.

You can view the full Lazy Susan Metal Garden Bench collection in our Shop.

The April Garden Bench in Slate Grey can be found here and, if you have any further questions, please don’t hesitate to Contact Us.